It is with a great deal of sadness that I report that Robert Sawyer, most recently of Fort Worth, Texas, was killed in an automobile accident this past Sunday night. I am writing this to those I consider to be friends of Palmarito, Puebla, México-based Casa Hogar La Familia and Greenville, SC-based Embrace the Dream Foundation, Inc.

I doubt that today there would be a Casa Hogar La Familia were it not for the considerable contributions of Robert Sawyer. In our darkest hour, when we had severed our relationship with our church partner in Ciudad Serdan, we asked for an 18-month lease on the building, which I thought was sufficient time to locate a new casa. I was so wrong. To my surprise, land was running the equivalent of $25,000 an acre for eroded land with no electricity, no water, no sewer and no telephone lines. We didn’t have that kind of money for what we considered a minimal amount of real estate: two acres.

We told our plight to everyone we met in Mexico, but still nothing we could afford became available. Finally, a pastor in the town of Tehuacan, a fairly large town about an hour’s drive from Serdan, in the southern portion of the State of Puebla, learned of two small houses under construction nearby that were close to completion and would soon be available for rent.

We could afford the rent, but the climate was miserable, especially when you compare it to our location in Serdan. Unlike Ciudad Serdan, Tehuacan was close to sea level and tropical, which meant it was in the mid to high 90s almost every day and air conditioning was not something Mexican children’s homes could afford, so we sucked it up and did what we had to do to get from day to day while we continued to look for land.

A grandmother of two of the children at La Familia lived in a small town I had never heard of — Palmarito, Puebla, Mexico. She happened to cross paths with the mayor in Palmarito and told him about the gringos who took care of her grandsons, and who were looking for approximately two acres of land to build a children’s home. She told him that we were nice folks and would be good for Palmarito because when we visited the casa hogar, we spent a lot of money on hotels, food, building supplies, etc. Then she matter of factly asked the mayor, “Why don’t you just give them the two acres?” She almost dropped her teeth when the mayor responded with, “Okay, I will give them the two acres they need.”

When we parted company with our church partner, we lost our connections for directors for the home. I had heard about a gringo from Texas who had first come to Mexico to assist with an earthquake disaster. After several life-changing events, not the least of which was becoming a Christian, this man ended up founding a new children’s home in a building another church had abandoned. His name was Robert Sawyer.

Robert Sawyer had grown that single children’s home into nine homes, so I figured he certainly knew a lot about running children’s homes and building new facilities.

I boarded an all-night bus for the 12 hour drive to Guadalajara, changed buses there and took a short 3-hour bus ride to another Mexican city I had never visited, Colima, in the State of Colima, to meet this man, Robert Sawyer.

Robert had grown up on the Texas side of the Red River. He told me stories about paddling a small fishing boat over to the Oklahoma side of the river to buy beer legally at age 18, but then floated it back over to sell it in Texas where the drinking age was 21. All of this, Robert explained, was before he became a Christian.

Robert fell in love with his pastor’s secretary, Carmen, and they were soon married. Carmen and Robert moved into a small apartment in one of the children’s homes and raised their son, David, in the same dormitory as the other male residents lived in. Carmen planned the daily menu and took care of the children while Robert took care of repairs and landscaping. Carmen was mamá and Robert was Papá.

Eventually — after about 20 years as house parents living in the children’s home — Robert and Carmen bought a small two BR and one bath home. They operated the children’s home during the day and turned over the home to the volunteers at night and drove the short distance to their new home.

When I arrived in Colima, the first thing Robert did was to introduce me to Nahum, his pastor. Nahum is one of these really special pastors who was dynamite in the pulpit, but also a terrific administrator, excellent at pastoral care, and an incredible teacher.

Nahum had founded his church when he was 18 and at the time I met him (I’m guessing at that time he was about 55 years of age) his church had over 4,000 members and operated a large Christian School. Robert discussed with Nahum our need for directors — ideally a husband and wife team — and they came up with a nearly perfect couple; their names were Juan Francisco and Silvia, who, incidentally, had three young children of their own.

Juan Francisco and Silvia are still directors at Casa Hogar La Familia. They have been in this capacity since 2005.

After installing Juan Francisco and Silvia in the temporary home in Tehuacan, the first order of business was to get started with construction on a building to house Casa Hogar La Familia on our two acres in Palmarito. This is where Robert Sawyer became worth his weight in gold. He had so much experience that he knew the mistakes to avoid. He used an exterior concrete block siding product that looks as good today as it did the day it was installed. He used portable bookshelves as partitions in the dormitories to give us flexibility when the government agency that oversees children’s homes modifies the number of children allowed to live in one dorm room.

This actually happened to us when the government agency reduced the number of children allowed in one dorm room from twelve to just nine. I could go on and on praising Robert for his foresight as he laid out the floor plan and selected building products for construction.

It was Robert who would take the all-night bus ride to Palmarito to supervise the contractors working on the new building. The entire two-story building was built one five-gallon bucket of concrete at a time. The workers would hoist the five-gallon buckets onto their shoulders and walk the freshly mixed concrete up gangplanks to the second floor.

On one mission trip that involved building the closet systems in two of the dormitory rooms, I invited my son and my oldest grandson to join us from Saint Andrews Episcopal in Downers Grove, IL. My grandson, Quentin, was just 12 years of age and he did a lot of growing up during that week of “heavy lifting.”

The first significant donation we received that allowed us to begin construction was $50,000 that came from a member of Robert Sawyer’s childhood church in Texas. That was the kind of person Robert was. He inspired confidence and trust with everyone who got to know him well.

A few years ago, Robert made the decision to move back to Texas to take care of adults who needed foster care. When Robert was taken from us this week, I was told he and Carmen were operating eight such foster care facilities.

Robert’s son, David, and his family have also moved to Texas from Mexico and David is reportedly doing extremely well in his profession.

With his wife, his in-laws and his son in the vehicle Robert was driving, they ran head-on into a man who was apparently trying to commit suicide as he had entered the interstate highway driving the wrong way — at night in the pitch black dark — and with his lights turned off. Robert died in the accident when he was hit head-on. Fortunately, his family was only bruised and had no life-threatening injuries.

Our prayers are being lifted up for Robert’s family, Carmen and David and David’s family. When the Lord took Robert Sawyer in that automobile accident this week, it had to be because he was badly needed someplace else in the Kingdom. We will be forever grateful for Robert for coming to our rescue in our darkest hour. May God bless the soul of Robert Sawyer. RIP.

For more information, do a Google search for: Fort Worth Obituaries or search for Robert Sawyer on Facebook. 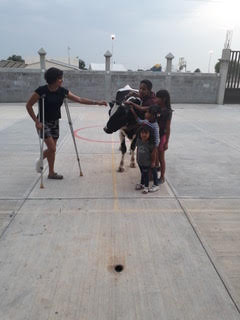 Note Silvia’s damaged left foot from a bus accident that occurred as she was traveling from visiting her parents in Colima to the casa hogar. The accident occurred in the City of Querétero. 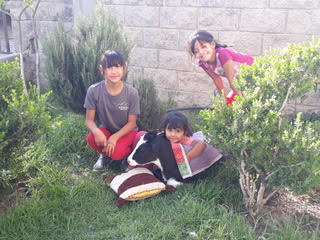 Julia, the baby cow who was named by Alejandra. Elizabeth is at left, Alejandra in the center and Estrella on the right. 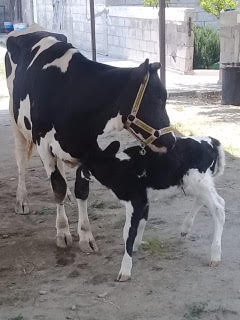 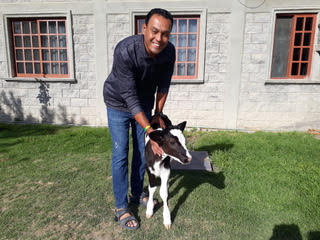 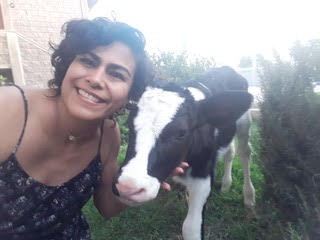