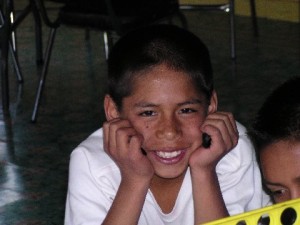 Each summer, the children of Casa Hogar La Familia travel to the City of Colima in the State of Colima, which is about an hour’s drive to the Pacific Ocean.  Colima is where Juan Francisco and Silvia are originally from and where they began their ministry.

Courtesy of Alexi, we have some photographs of several of the children enjoying a rare visit to the Pacific Ocean.  Please click on the following link to see the photographs:

This week, I received an email from Ruth Irvine, our sister in Christ and La Familia supporter from St. Andrews Episcopal in Downers Grove, IL.

Here’s what Ruth had to say:

“Well, we had the Fiesta [fundraiser] and it was just great.  I think we had about 70 people.  We got some new faces from St Andrew’s, which was wonderful.  Again, people were generous and excited about La Familia.  We raised $3,759.03, which is better than last year.”

St. Andrews has accepted responsibility for monthly support at La Familia for the month of September 2012 and has designated the balance of the money they raised to the second floor construction project.

The pastor at St. Andrews announced his support for another mission team to travel to La Familia in 2013, so this will be great news for the children.

Our thanks go out to Ruth Irvine and all of the good folks at St. Andrews in Downers Grove for their hard work and generosity in making the Fiesta Fundraiser such a huge success.

I really shouldn’t be in Mexico. I suffer from an anxiety disorder known as agoraphobia. This is a fancy name for a fear of being in places where escape is difficult or impossible. For me, this manifests itself in fear of being on an airplane, a bus or a vehicle that I am not driving. To get to Mexico I had to get on an airplane, take a 2 hour bus ride, take another hour long bus ride then hop in a van with a man driving that I have only met twice. I really shouldn’t be here.

I am a person who likes routines and schedules. I do not like to try new things. I certainly don’t like foods I don’t know or can’t see what is in it. I have an extreme fear of germs, of getting sick, especially something gastrointestinal. I really shouldn’t be here.

I’m pretty sure I’m not the only one I have encountered on this trip that has had that thought. I look at the Casa Hogar La Familia Children’s Home and see 32 children who at one time or another had that thought. I witnessed it yesterday when a family came to say what looked like final goodbyes to a pair of brothers. I watched from a distance as one child openly cried and sobbed and clung to his father. I stood helplessly as the grandmother, father, mother and two small children left them home without those boys. I wondered if Christian was thinking “I shouldn’t be here!”.

I look at the house parents, Juan Francisco and Silvia, who give their entire lives to these children, and wonder if they ever think that? These wonderful talented people could be anywhere doing anything, yet they made the choice to love these children and raise them up in Christ. Or what about their three children Damaly, Alexi and Daniel, who live in the home, sleep in the dorms with the other children, and share their birth parents with so many. Do they ever think, “I really shouldn’t be here”?

Muriel, a young lady who lives at the home as a volunteer, has been there for four years. She came knowing no Spanish and now serves as the translator when Americans come to stay and work. Muriel did not come by choice but she has willingly stayed. Muriel was originally sent to the home by her parents, on what I would guess, was a last resort to get her out of the house. Muriel tells the story that she told her parents “Send me anywhere but Mexico”. I know four years ago she had the same thought I had “I really shouldn’t be here”.

A young couple was presented this morning during worship as an engaged couple. Cintya has lived in the home most of her life. She has graduated from technical school and is now a cosmetologist. Her fiance Omar works at the home. Omar’s life has not been easy either. He recently completed a rehabilitation program in Colima prior to coming to the home. I imagine he had a life filled with struggles and challenges, some of which he will face for a lifetime if he wants to maintain a clean life. I wonder if Omar ever imagined that God would place him in such a spirit filled place as Casa Hogar. I wonder if he ever thought, “I really shouldn’t be here”.

I worshiped twice today. Once at 6:00 am at a prayer service at the home. Five of us attended this service. When we first arrived there were about a dozen people there. As the service went on, more children came out, most in their pajamas, eyes barely open, but hands and voices raised to God. We sang and prayed for an hour. I felt the very presence of God among us. At the end of the service the children greeted us with hugs and kisses. It was a feeling that I cannot describe.

After another amazing breakfast at Sandy’s, which was opened just for us, the entire team headed back for the regular worship service. For an hour we sang and danced. Although the songs were new and the language was not our own, we understood fully that the Lord is to be praised! In the second hour we prayed for a couple that came to present their two small daughters (both under the age of 3) to the church. This was the second time they had come to that church and they asked for prayers as they continued to “search for God.”

We prayed for Cintya and Omar as they were presented as an engaged couple. We listened to the word brought by Juan Fransico warning us of the dangers of being impulsive and to look toward the pastor for guidance. We were reminded that each of us brings unique gifts for God to use.  I even had the honor of presenting a prayer at the end of the service. Two hours of worship and I felt like I could have done that all day long. Maybe I should be here.

We spent the rest of the day playing with the children and preparing a hamburger lunch for the home. I watched as older ones played with younger ones. As each child would see a job that needed to be done, he or she would just go do it. I heard “Mommy” over and over again and watched Silvia respond with love and patience at each cry of her name. I witnessed a table full of youth and children hanging on every word Juan Francisco spoke. I saw children come take the hand of someone from our team to lead him or her to a game or just to sit and “talk.”

I played volleyball with Christian, several other children and Doug from our team. All the children took turns serving the ball, cheered each other on and didn’t argue about if the ball was in or out of bounds. No one kept score and no one cared.

Christian watched his family leave him yesterday, perhaps for the final time, yet he did not act like he didn’t want to be at the home.

I observed Omar serving without being asked, a smile on his face, a laugh on his lips. He might not have thought he would be there but I think he was glad that he is.
As for me, I really shouldn’t be here. Except for one thing. God has called me into service. I wasn’t called to do what I always do, to play it safe, to be in my comfort zone. God did not grant me gifts and graces so I could stay in my perfect world and have everything I need. It is not about me. It is about Juan Francisco, Silvia, Cintya, Omar and so many more that I have not met yet. It is about being there to hear Christian’s cry and to do the only thing I knew how to do which is to hold him and love him. No words were needed. So in the end, yes, I really should be here.

One final thought. There are orphanages all over the world. Some provide only the basics such as food, clothing and shelter. Casa Hogar is different. Juan Francisco and Silvia could do the bare minimum and no one would blame them for that. Instead, they have dedicated their lives and their children’s lives to making disciples for the transformation of the world. This is not an easy task. Yet they do it with love, discipline and guidance from the Holy Spirit. You feel it when you walk into the home. You witness it while watching each person treat another with respect and love.  I really should be here because God is here. I will go where God sends me, even when I don’t think I should be there.

I hope you will join me in praying for the children, the volunteers and the house family. Pray for the families that for one reason or another had to leave a child there. Pray for those struggling with that decision and for the children that will come. Pray that the rest of us open our hearts to God’s calling in our lives and that we have the courage to follow and to be in places we really shouldn’t be.